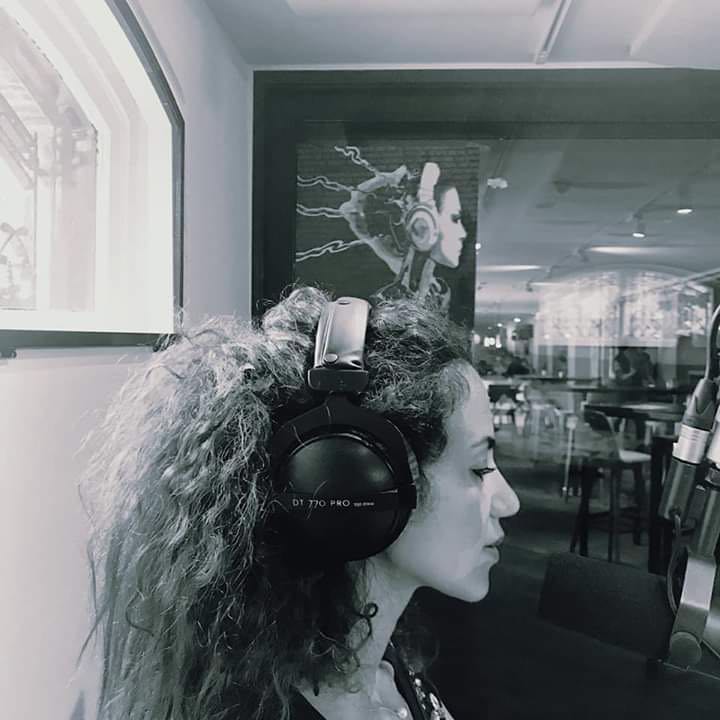 A conversation with Nivin Baranbo, an ambitious radio host from Syria

OpenEmbassy has daily contact with newcomers, be it through our Welcome App or through community building in the different municipalities where we work. We learn something from each conversation. Through stories and experiences, we learn how things can improve in the Netherlands.

Something we hear again and again is that newcomers feel that their stories are not sufficiently heard, and that they receive little or incorrect guidance in their search for employment. One of the conversations we had was with Nivin Baranbo, who currently works in the hospitality industry, but would like to work for the radio again. We invite you to read more about her experience, while asking yourself the following question: what can I learn from Nivin’s story?

Tell us about yourself

My name is Nivin Baranbo, and I am 32 years old. I am from Damascus, Syria. I studied media and journalism at the University of Damascus and worked as a presenter and reporter for the American Academy. After receiving my diploma, I could finally start my dream job: I worked for the largest radio show in Syria, Arabesque.

Can you tell us more about the work you did in Syria?

I had different shows on the radio, such as the daily morning show and other shows centered around social issues.

Can you give us an example of one of the issues that you spoke about during one of your shows?

One of the shows was, for example, about problems that every teen encounters at school, at home, and on the streets. For example, we looked into whether teenagers who have a good relationship with their parents, felt comfortable to discuss sex or other taboo topics with them. I tried to approach the issue from different perspectives. First, by talking to the teenagers, then to the parents, and finally a psychologist to help both teens and their parents.

You now live in the Netherlands. What were your expectations before you arrived?

I arrived in 2016 fleeing war and looking for a better future for my son. I came to the Netherlands with the dream to continue the work I was doing in Syria.

You broadcasted the first ever Syrian radio show from the Netherlands and organised a weekly show on different integration topics. Can you tell us why you started this?

Together with a group of other young Syrians, I received the chance to start a Syrian radio station in Amsterdam. We received a bit of funding to start a new project, which we used to buy equipment and to rent a studio in Vondelpark CS. I also had a two-hour open air show every Tuesday. I was able to set up the program from the ground up, and I focused on newcomers. How can we make our new society more beautiful and easier for us? How can we solve the problems we experience? What are our fears and how can we solve daily obstacles in the best possible way? During the show, we also played the Arabic music that we had dearly missed on Dutch radio.

Why did the show stop?

Unfortunately, we had to stop after seven months because we ran out of money. Another disappointment was that the municipality where I lived gave me very little time and opportunities to find something in my field. I was forced to find a paying job in a short period of time, so I had to give up on my dream. I currently work as a waitress, and behind the bar at a restaurant.

What would you like to do in the Netherlands?

After a year at this job, I got the strong feeling that I had to go back to what I love doing. I am sure of what I can do and what I can offer. It was then that I came up with a new idea. I would love to work as a radio host at a Dutch radio station, where I can bridge two cultures through my own language, Arabic. The program would consist of different parts. For example, it would start with Dutch news in Arabic, so that everyone can understand what is going on in the society in which they live. It would be interesting to discuss the news as well. Furthermore, it would also be rather rewarding to me include a section in which we focus on newcomers. They could tell us about their daily lives, about the difficulties they are currently encountering, and how they are working through them. Not only would we include newcomers in this section, but also locals.

I would also devote a section in which I interview people who have achieved their purpose here in the Netherlands, whether it be through studying, work, or doing anything else. This way, we can show people what we are able to achieve.

Finally, I would have an entertainment section, where I could discuss what other Dutch cities are nice to visit, recommend museums to visit, or talk about other activities people could take part in.

I would love to help people through a radio show that explains things to newcomers. Everything is new in the Netherlands, and people have tons of questions. A radio show would be really the best way to reach a wide audience.

What kind of support do you need?

I would love some support or advice on how I can develop my idea. For example, what radio station or which other platform would be good to contact?

Yes, that I see myself as someone who has a lot of luck, because I received the chance to build my life again away from the war.

It would be rewarding to include a section in which we focus on newcomers. They could tell us about their daily lives, about the difficulties they are currently encountering, and how they are working through them. Not only would we include newcomers in this section, but also locals.

Are you new in the Netherlands?